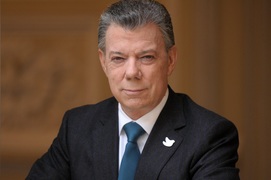 Juan Manuel Santos is recognized as one of the most influential leaders in the world. In January 2017 he was featured by the World Economic Forum as Statesman of the Year. Previously, on two occasions, he had been recognized by TIME magazine among the 100 most influential people in the world. President Santos a cadet of the Naval Academy in Cartagena, studied Economics and Business Administration at the University of Kansas and pursued graduate courses at the London School of Economics and Political Science and at the Harvard Kennedy School. He was also a Neiman Fellow of Harvard University. He began his public service career as Head of Colombia’s Delegation to the International Coffee Organization (ICO) in London. He was the last Designee to the Presidency of the Republic (a position that was later folded into the office of Vice President), and the first Foreign Trade Minister. He chaired the Eighth United Nations Conference on Trade and Development. President Santos also served as Finance and Public Credit Minister and National Defense Minister.

In 1994, he founded the Buen Gobierno (Good Government) Foundation and later on, in 2005, the political party of the National Unity (Partido de la U), which is to date the greatest political force of the country. He practiced journalism as op-ed columnist and deputy editor of El Tiempo newspaper. He received the King of Spain International Journalism Award and was President of the Commission of Freedom of Expression of the Inter-American Press Association (SIP). He has published several books, including The Third Way, which he wrote with former British Prime Minister Tony Blair, and Jaque al Terror (Checkmate to Terror), in which he describes how he successfully fought the FARC.

On June 20, 2010 he was elected President of the Republic of Colombia where he obtained the highest number of votes in the history of the country. In June 2014, he was re-elected as President of Colombia for the constitutional period 2014 – 2018.